In 2015/16, DS18 based its design investigations into architecture, energy and matter in the Maldives, the coral archipelago running down the centre of the Indian Ocean. We did so in part to critique and offer a different model for architecture from that proposed by archipelago urbanism, a model based on a binary opposition between architecture/island and metropolis/sea. Instead, we proposed to engage with the ocean and other fluid dynamics of the archipelago as emergent conditions for architecture.

The Malidives is an archipelago of 26 coral atolls made up of 1,196 islands forming a coral barricade running N-S for 960 kms from 7o N to just south of the equator and E-W for 130 kms between 72o and 73o E. These lie atop a submarine volcanic ridge that formed from about 67 million years ago when what is today known as the Indian subcontinent travelled, on its tectonic drift northwards, over an especially hot stretch of the earth’s mantle, extending from today’s Reunion Island to the Deccan Traps of India. As it did so, a line of volcanoes erupted forming what is known today as the Laccadives-Chagos Ridge, stretching over 2000 kilometres down the centre of the Indian Ocean. When what became India met the Asian plate, it slowed down and the volcanoes slowly subsided into the sea. Today, this volcanic ridge lies at a depth of 270-500m below sea level, bounded by waters which drop to a depth of 2,500m on the east side and 4,000m on the west. As it subsided, it left upward growing fringing coral that had formed around its peaks where they touched the surface of the water. In this manner, the reefs that became the atolls of the Maldives were born.

This coral barricade is spread out over an area of approximately 90,000 sq. kms, of which only 300 sq. kms (.003%) qualifies as land. It is a territory whose area is comprised 99.66% of ocean. It is centrally governed from Male, the capital city, where approximately 1/3 of the population (132,000 / 393, 595) now live. Of its 1,996 islands, only 192 are inhabited and 109 have been leased for development as single resort hotels, where the major attraction is the sea. This makes it an apt place to reconsider or even overturn the idea of territory as terra-centric and to consider what it means to live on a terra-queous globe.

The Maldives. Map drawn by Ben Pollock and Lindsay Bremner.

The ideas explored in the studio were:

1 That, counter to the archipelago urbanism model, an archipelago is not a collection of value-laden outcrops in a valueless or even neutral sea. The archipelagic sea is full of value, meaning and significance. It is full of places, passages (at times treacherous), shoals, reefs, wrecks and banks. Reading it, understanding it, navigating it, and working with its materiality, rhythms and energies occupies a central place in the daily lives and territorial imaginaries of Maldivian people and will of our studio. The sea is part of, not apart from the experience of the city.  The capital city, Male, is an archipelago within an archipelago; its urban functions are distributed across a number of islands – an airport island, an oil storage island, a waste island, a prison island, suburban islands etc.,) and into the sea, and boats and ferries make the sea and its rhythms part of daily life. The sea is also is an integral part of urban infrastructure – sewage plant, waste dump, water supply, energy source, food source; it provides leisure and security; it is highly striated by international law and protocols, national jurisdictions, data gathering devices, fish aggregating devices and so on. 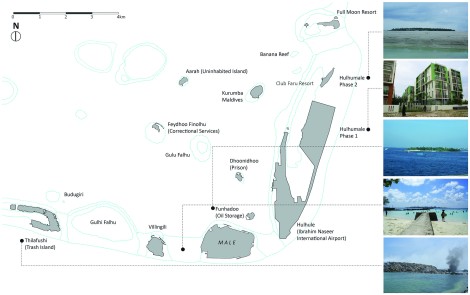 2 In addition, we now know that the ocean serves as a vital element in the earth system, not least because it provides roughly 50% of the world’s oxygen, but it also plays a vital role in the earth’s carbon cycle, nutrient cycle, water cycle and thermohaline cycle, all of which affect weather, climate and food chain patterns in complex ways. These patterns are today being altered by anthropocenic climate change, which could have major impacts on the Maldives, through sea level rise, water temperature rise, bleaching of coral reefs, water shortages, increased frequency of extreme weather events etc. The sea in other words is not void, valueless, neutral or outside of society, but a highly articulated polity, a vital component of the earth system, and a socio-ecological risk. 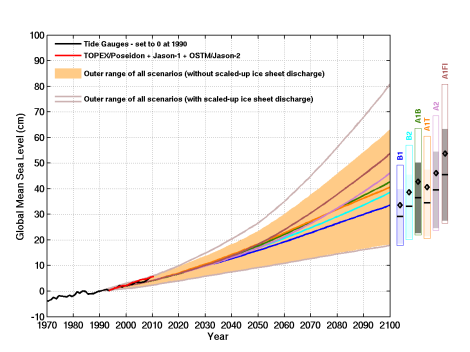 3 That, in an archipelago of coral islands and atolls, the boundaries between land and sea i.e. what is land and what is sea, is not that well defined and changes all the time, from day to day and season to season. Atolls are not things, but events, more biology and hydrology than geology. They are dynamic living systems undergoing continuous change as islands and reefs adapt to changes in prevailing winds and seas as well as sea level changes. Islands start to form when currents leave a particular part of a reef relatively calm, so that sand, rubble and eventually vegetation build up and take hold. These dynamics are materially shaped by monsoons, winds and currents that change direction each year and move sand and rubble around as they do so.

An island starting to form off Hulhule. Photograph; Lindsay Bremner

4 Their dynamics are also shaped by other less visible, but no less material currents and flows – of capital, technologies, commodities, politics, data and imaginaries that circulate through them. The archipelago is an emergent, topological system driven by interactions between tectonic plate movements, wind and air flow, current directions and strengths, tidal rhythms, the metabolic processes of tiny sea creatures, fish, birds and humans and the practices and technologies by means of which humans dredge, mound, funnel, reclaim, pump and move matter around. 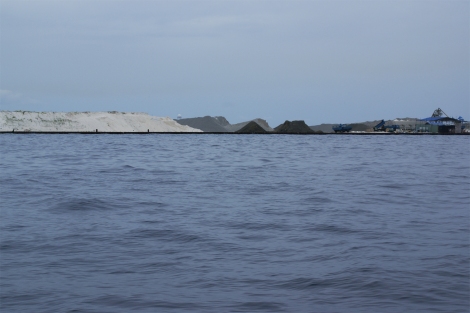 If there are no stable co-ordinates or boundaries between land and sea, humans and non-humans, architecture and the city, but rather a complex system of dynamic exchanges and distributed agency, what new problematics does this throw up for architecture?

If the Maldives archipelago is not an aggregation of ontologically distinct realms, but rather a complex, emergent, relational, self organising ensemble of coral, fish, winds, humidity, temperature, waves, currents, sand, ships, scientists, developers, politicians, international agencies, tourists, buildings, infrastructure, data and much besides, how can we deploy design within this complex system?

How are architecture and the metropolis, land and sea thinkable if not in binary terms?

How can we map, model and visualise the archipelago as a dynamic, emergent system?

What innovative design methods and techniques can be developed for working with its complex, multivalent energies and flows?

How can design monitor, redirect, realign, intercept or adapt these and how will what we think of as architecture be transformed in doing so?

In the first semester students modeled (i) interactions between physical elements like waves, sea levels, winds and sand, at the scale of a sample site in the Maldives and (ii) the non-physical, but no less material flows of objects, capital, tourists, building materials etc. at a number of scales, up to the scale of the globe. The first were computationally simulated, the second represented through maps and diagrams. During the second semester, students developed design proposals at the intersection of the flows modelled e.g. at the intersection of sand + Chinese capital / winds + air-conditioning units / tides and surfboards etc. The outcomes of these briefs will be covered in separate blogposts to follow.

Moore, J. W. (no date). “From Object to Oikeios. Environment-Making in the Capitalist World-Ecology.” Unpublished Paper.

Apparatus             Anything that has the capacity to capture, orient, determine, intercept, model, control or secure the gestures, behaviours, opinions or discourses of living beings

Assemblage          A jumbling together of discrete parts or pieces that is capable of producing any number of effects, rather than a tightly organized and coherent whole producing one dominant reading. The beauty of the assemblage is that, since it lacks organization, it can draw into its body any number of disparate elements

Dissipative structures      The patterns that self-organise in dissipative systems

Emergence:          A process whereby larger entities, patterns and regularities arise through interactions amongst smaller or simpler entities that themselves do not exhibit such properties

Thermodynamic depth   Measure of the capacity for complexity in a system 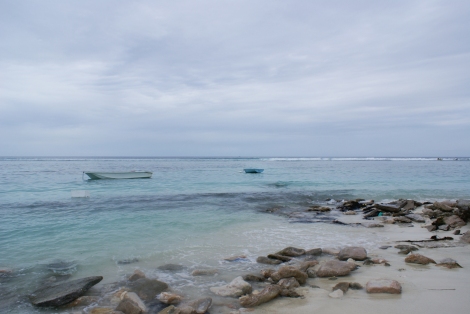